Anonymous culture in crypto may be losing its relevance

The reason for the rise in anonymous lifestyles is that cryptocurrencies are increasingly becoming a part of everyday life. From used cars to homes, people don’t want their financial dealings known by banks and governments, so they organize themselves in an informal fashion out of necessity.

The “is blockchain anonymous” is a question that has been asked many times. There are some who believe it is, while others disagree. The answer to the question may be different depending on what you’re using the technology for. 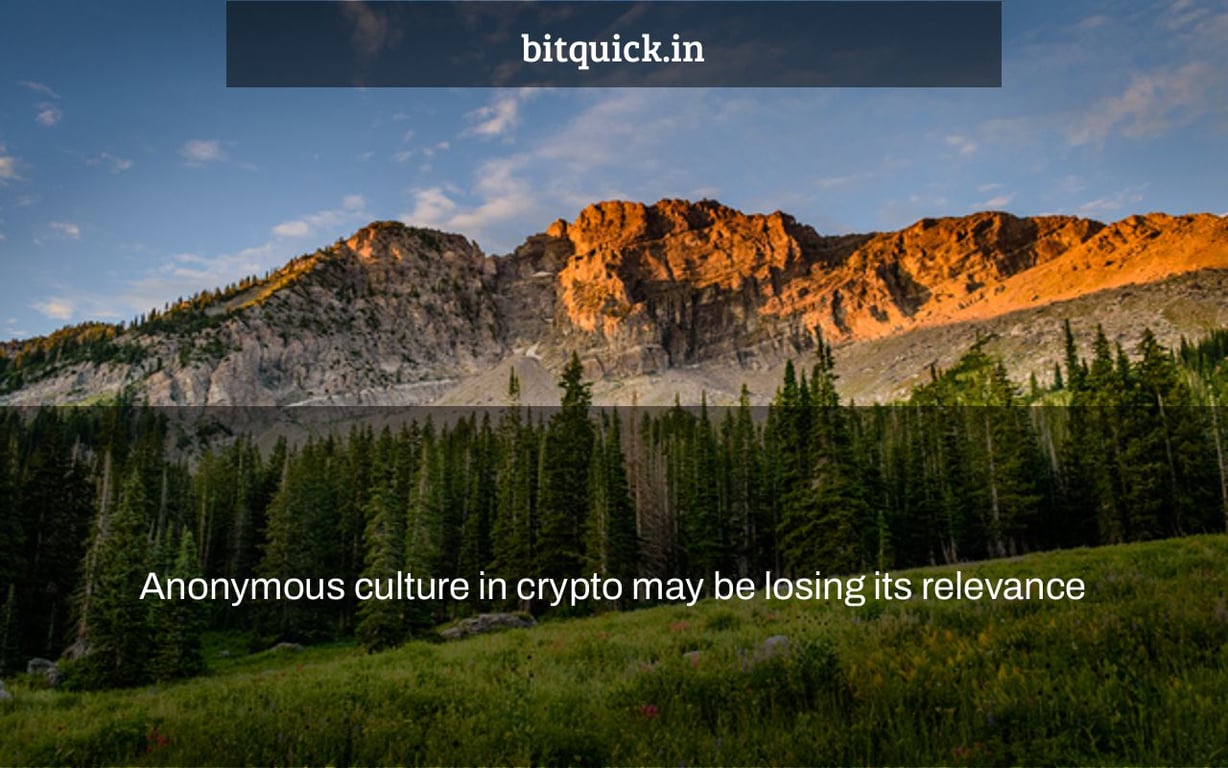 Many principles promoted in the early days of the internet have been passed down to crypto.

Since the inception of Bitcoin (BTC), many users in the crypto sector have remained anonymous, since utilizing this digital currency provides a degree of privacy as long as no one knows the user’s public address. The exact identity of Satoshi Nakamoto, the inventor, is still unknown.

The most recent wave of innovation, led by decentralized finance (DeFi) and nonfungible token (NFT) initiatives, has been led by anonymous teams that keep their right to anonymity.

Anonymous individual 0xngmi, the creator of the DeFi analytics dashboard DefiLlama, has announced a bug bounty on his identity. Rather than announcing the search to identify flaws in the DefiLlama code, he offered 1 Ether (ETH) to anybody who could expose his identity and explain how they discovered it. At the time of writing, no one had been able to figure out who he was.

0xngmi has also been training individuals who want to remain anonymous with a “How to Stay Anon” guide, which is a collaborative document that participants may contribute to and alter to better.

Navigating through Crypto Twitter reveals a plethora of pseudonymous “celebrities” who, simply based on their reputations, have a digital identity with a sizable following.

The DeFi Edge, another Twitter account that remains nameless, stated the reasons for his decision to keep the account secret. For the time being, the inventor of the namesake DeFi analysis site has declined to divulge their identify, but has provided some small details:

Why I’ve chosen anonymity for the time being, and why I may semi-doxx myself later: pic.twitter.com/OGZLmU9Nte

As the industry transitions to Web3 and a slew of new talent is attracted to the ecosystem, a growing number of players have opted to adopt a different strategy. They may subsequently divulge certain aspects of their physical self to become pseudonymous, or they might expose their genuine identity entirely.

Following the recent Terra collapse, a guy showed up to Do Kwon’s house in Seoul only to discover his wife answering the door, according to the BBC. In these times of difficulty, Terra’s 30-year-old creator has been active on Crypto Twitter, using his actual name to promote his system and connect with the community. While revealing his true name to the public may have helped him build trust with investors and the community, it also put him at risk in real life. These are just a few of the reasons why many businesses in the industry want to stay nameless.

How the fall of Terra may affect future stablecoin legislation

Protecting anonymity and avoiding being doxxed has become an essential problem of the new cultural and technical revolution taking place in online society, which is a perpetual conflict between the free flow of information and the individual’s privacy.

One of the most contentious identity exposes occurred when writer Kate Notopoulos published a story headlined “We revealed the genuine names of Bored Ape Yacht Club’s pseudonymous founders,” in which she uncovered the identities using publicly accessible Yuga Labs information.

Protesters dressed as Guy Fawkes. The mask has become a symbol of anonymity and privacy in the digital era.

Doxxing is the act of revealing someone’s identify.

Doxxing, which is usually referred to as a hostile action carried out through the internet, refers to the capacity to track out a person and expose private information about that person or organization. Although the phrase was originated by extremist organizations to threaten and intimidate disadvantaged people online, it now has a broader meaning that includes disclosing one’s identify without having exclusively extremist implications.

Charlotte Fang was recently identified as the person behind the anonymous account Miya, according to 0xngmi. Milady Maker, the creator of the NFT art project, is accused of using a pseudonymous internet presence to disseminate hate speech against minorities on social media.

Charlotte had to stand aside from the project after being identified as the person behind the pseudonymous account purportedly related to an internet cult, while Milady Maker’s floor price fell.

Anonymous teams are in charge of fortunes.

Decentralized autonomous organizations (DAOs) have made it possible for a large number of people to participate to a project’s governance while staying anonymous. The bulk of these initiatives have anonymous creators and donors, either for safety concerns or to dodge legislation. In recent years, this has become the norm.

Grug, a Twitter pseudonym, explained to Cointelegraph why he chose to stay anonymous as CapitalGrug and the importance of being assessed entirely on performance and ideas:

“I believe the major reason I selected anonymity was to be able to engage in and contribute to the same sort of irreverent culture that I found so appealing to crypto from the beginning.”

Many excellent performers in the area have stayed anonymous, adding value to initiatives and communities by preventing other distinguishing features from influencing people’s opinions of their identity.

Being anonymous might be a good option for those looking for a new start, but it can also enable harmful actors to penetrate the area.

Michael Patryn, the co-founder of now-defunct crypto exchange QuadrigaCX, was revealed as 0xSifu, the inventor of Defi protocol Wonderland, back in January.

The scandal-plagued exchange’s co-founder had already been sentenced to 18 months in a federal prison in the United States for identity theft and credit card fraud. Patryn is not even his true name; he apparently changed his identity from Omar Dhanani after his jail sentence and before launching QuadrigaCX.

With this discovery, the Wonderland protocol came crashing down, and the argument over whether anonymous teams should be permitted to handle big quantities of money erupted. Even Danielle Sesta, co-founder of Wonderland, believes that anonymous teams will become obsolete in favor of teams whose complete identities are known.

Redefining the concept of anonymity

Although there has been a shift toward openness in crypto in recent years, the ethos of anonymity remains entrenched. As Grug pointed out, one does not have to be entirely anonymous in the space.

“For example, our money is entirely anonymous, despite the fact that we’ve all been doxxed.” People who pull out their phones to follow me on Twitter during events are typically anonymous.”

Identity, whether public or private, is a complex issue with which we all grapple. The key to a more rich and diversified crypto community will be finding a balance between complete anonymity and a public identity.

To this point, anonymous culture in crypto has shown to be beneficial, since it reduces prejudice and enables people to completely express themselves. Bad actors may use this to have a new start, which might be problematic if they continue to act viciously. However, if they become productive members of society and contribute to the environment, it may be shown that they deserve a second chance.

The “is bitcoin cash anonymous” is a question that has been asked many times in the past. Crypto experts believe that it may be losing its relevance with the introduction of new privacy coins like Monero and Zcash.