Investing In IoTeX (IOTX) – Everything You Need to Know

IoTeX is a blockchain-based decentralized network of IoT devices that aim to bridge the gap between users, their data and the services they use. There are three primary categories of IoT device: sensors, hubs and gateways. In this article I will go over where IoTex fits into those 3 categories as well as what gives it value today

IoTeX is a cryptocurrency that has been around for quite some time. It is an open-source, decentralized and scalable blockchain platform that offers privacy by default. IoTeX is currently trading at $1.26 USD on the market with a total supply of 1 billion tokens. The price prediction 2025 for IoTex can be found here: https://www.cryptocompare.com/coins/iotex/. 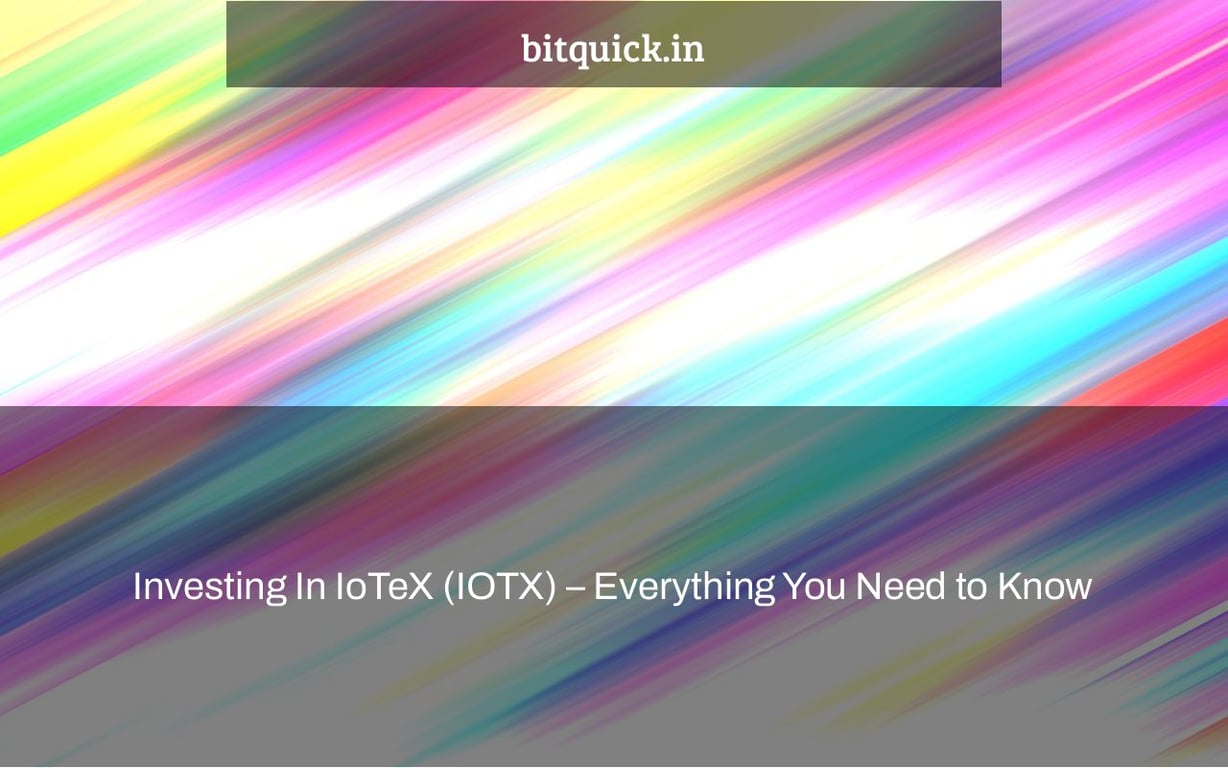 IoTeX (IOTX) is a decentralized ecosystem for connecting Internet of Things devices. To boost efficiency, the network incorporates sophisticated technologies such as machine learning. IoTeX aims to make it simpler for corporate customers to integrate IoT technology into their current business platforms.

The Internet of Things (IoT) is a phrase used to describe the developing global community of smart gadgets. The object must contain sensors and the capacity to transmit data via the internet in order to be classified as a smart gadget. There are billions of these devices on the market now. IoT devices include anything from refrigerators to smartphones.

Analysts anticipate that billions more of these gadgets will be in use around the world in the future. Multiple variables are causing these systems to thrive right now. The widespread availability of low-cost high-speed internet and decreasing production costs for these gadgets are propelling the industry to new heights.

What Issues Does IoTeX (IOTX) Try to Solve?

IoTeX is a new kind of IoT-powered blockchain that makes use of these smart gadgets. The system facilitates the addition of additional devices to the network as part of this plan. It just takes a few minutes to add a sensor to the IoTex system. The protocol is now being used by +9,366 smart devices.

The creators of IoTeX’s approach included making the network backward compatible with the EVM (Ethereum Virtual Machine). As a result, Ethereum Dapps may easily transition to IoTeX. They may then benefit from decreased costs and more scalability without having to reprogramme their systems.

When you consider that Ethereum now leads the market, this method makes logical. It’s the world’s biggest Dapp ecosystem. However, owing to traffic congestion, it is now experiencing record-high petrol prices. For these users, IoTeX gives much-needed respite.

Another important difficulty that blockchain users are now dealing with is compartmentalization. There are many diverse decentralized networks, but only a handful of them connect freely with one another. As a result of this situation, data islands have formed inside their own networks. It also causes developers to waste time developing protocols that might have been derived from existing sources.

IoTeX provides a number of advantages to the market. The protocol allows users to do transactions quickly, securely, and transparently. Across many platforms, users may quickly add and monitor data from new devices. This data, when seen as a whole, gives a more complete picture of corporate processes.

IoTeX has the capacity to auto-scale due to its technological framework. The deployment of IoT devices results in a network that is more decentralized and diversified. To achieve particular requirements and performance standards, the protocol might add or eliminate these devices.

The IoTeX development team prioritized privacy. Many more privacy control measures are built into the platform than many of its rivals. The platform’s decentralized structure, paired with its openness, makes it an excellent alternative for crypto users seeking anonymity.

What is IoTeX (IOTX) and How Does It Work?

IoTeX uses specially developed smart contracts to link real-world devices to the blockchain. To increase usability and usefulness across multiple networks, the system includes a cross-chain data bridge. It also uses oracles, which are off-chain sensors, to keep track of device data.

As an L2 Oracle system, the Truststream protocol works. Oracles are off-chain sensors that can send and receive data over a decentralized network. These sensors are critical for verifying and monitoring important data. Oracles are, as a result, one of the most significant blockchain technologies to emerge in recent years.

Roll-DPoS is a new DPoS (delegated proof-of-stake) version introduced by IoTeX. This method incorporates randomization to boost efficiency and avoid centralization by combining the best features of delegated staking networks. The system allows users to stake their tokens to vote for delegates as part of this plan.

The top 36 delegates are then selected at random. This drawing decides which of the 24 delegates will be responsible for validating transactions and disbursing rewards. This method has the benefit of greatly improving scalability while also lowering power consumption. As a result, IoTeX only requires a fraction of the energy that Ethereum does to stay valid.

IOTX is the network’s primary utility token. This cryptocurrency may be used to make payments, pay fees, and engage with network services. Smart contract executions are fueled by IoTeX, which is used by programmers and developers. This adaptable token may also be staked to earn passive benefits.

Staking your IOTX is the simplest and most risk-free approach to ensure passive earnings. In return for benefits, you agree to stake your tokens and lock them inside a network smart contract. The benefits of staking include more constant returns and less labor on the side of investors.

One of the most distinguishing elements of the IoTeX system is the MachineFi protocol. This solution allows users to transform machine intelligence and resources into revenues. Anyone may completely monetize their smart gadgets and other digital assets using the system.

When the MachineFi protocol was first introduced, IoTeX conducted a special promotion. Users may purchase a limited edition MachineFi NFT for 100 IOTX. Non-fungible tokens (NFTs) are one-of-a-kind digital assets that rely on blockchain verification methods to maintain their validity and authenticity. In addition, the move showcased IoTeX’s NFT capabilities to the market.

The fusion of IoT and blockchain technology has long been a goal of market developers. Both of these new technologies have the potential to completely disrupt existing corporate operations. They complement one other in a way that increases the performance of both systems when used together. As a result, as more businesses seek low-cost blockchain and IoT integration options, IoTeX will continue to gain traction in the corporate world.

“invest in iotex” is a cryptocurrency that has been gaining popularity recently. This article will go over what IoTeX is, how to invest in it, and the risks involved with this investment.

A: IOTX coin is a new cryptocurrency based on blockchain technology. It has been introduced by the team of developers in order to make cryptocurrencies more accessible and trusted for the general public.

Is IoTeX crypto a good investment?

.
A: I am not an investment expert, so I cant really answer that. However, if you want detailed information on the project and its potential growth as a crypto asset then check out their website to find more info.

What is the future of IOTX coin?

A: IOTX coin is a digital currency that can be used to purchase items from within the game. It was created in order to make the economy of Beat Saber more accessible, and help fund development for future expansions.