Terra Founder Do Kwon Shares Recovery Strategy Amid LUNA and UST Crashing Below $5 and $0.30

By Oscar Martinez
May 11, 2022
Cryptocurrency

In the past few weeks, cryptocurrency prices have plummeted by a significant amount. While some coins managed to recover, others continue to struggle as investors panic about what this means for their portfolio. 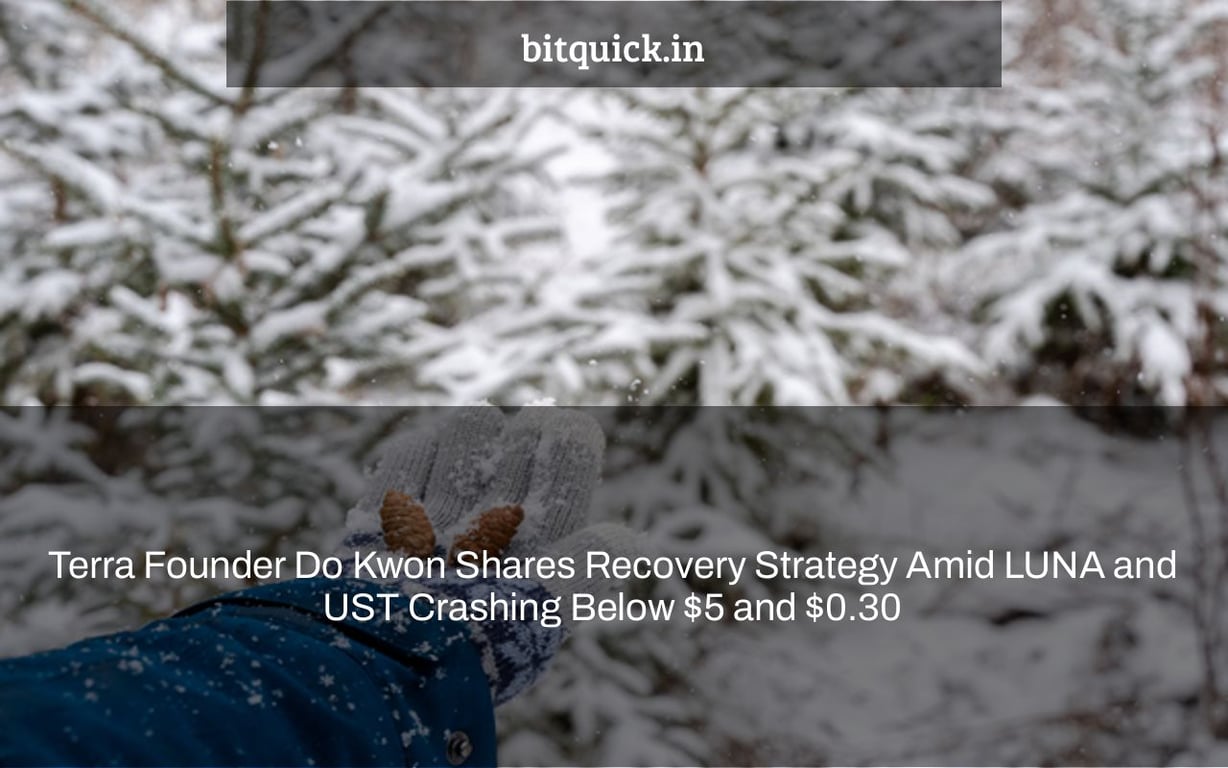 May has been a disastrous month for many ecosystems’ native tokens, but none has been impacted as badly as Terra. The market has seen large drops in Terra ecosystem assets, LUNA, and TerraUSD, with the latter losing more than half of its value.

The price of bitcoin and other cryptocurrencies

Bitcoin and Ether, the top two assets by market size, have lost 19.63 percent and 16.65 percent, respectively, in the previous seven days. The bulk of cryptocurrencies have done somewhat worse, with Cardano’s ADA, which has lost 21.25 percent in the same time frame, being among those with lesser losses.

Solana (SOL) has also suffered a drop in price, falling 27.84 percent, while Avalanche (AVAX) has dropped 38.96 percent. These losses, however, pale in comparison to the hemorrhaging in the Terra (LUNA) market.

LUNA had a major sell-off only hours before, plunging from over $20 at the close of yesterday to $4.24. The token is presently trading at $4.59, a loss of 85.97 percent on the day. Since August 2021, this is the first time the project has returned to single-digit territory.

Why is the LUNA price falling?

In January, the MakerDAO co-founder had a lot to say about Terra and its related stable coin. He specifically said that these are not projects “designed for durability,” and that like ponzi schemes, they will fail as soon as “the market turns for real.” While this isn’t exactly what’s going on right now, there’s no denying Terra is collapsing, thanks in part to its fixed currency peg.

The Luna Foundation Guard, a non-profit that supports Terra, decided on Monday to contribute up to $1.5 billion to safeguard the peg, according to Securities.IO. This was in reaction to UST losing its peg, but it turned out that the spending spree was insufficient to save the situation. The LFG has requested another payment in excess of $1 billion to assist keep the peg in place.

The need for consistent coin control

The problem has become worse today, with about half of the TerraUSD value being lost. While the stable currency has recovered and is now trading at The situation has worsened today with almost half of TerraUSD value being wiped away. While the stable coin has improved and bounced from its lowest mark ever to $0.4852 at writing, it is still deep in the red..4852 at the time of writing, it is still in the red.

This is such a significant breakthrough that it was brought up at a recent congressional hearing. During the session, US Treasury Secretary Janet Yellen mentioned the TerraUSD, citing it as a case study for stable coin regulation.

“A stablecoin known as TerraUSD went on a run and saw its value plummet. “I believe this just shows that this is a quickly developing product with rapidly rising hazards,” she said.

Terra is presently on an unravelling road and may disintegrate as a result of the devastating collision. Investors who are fast abandoning their shares have not been reassured by Terraform Labs CEO Do Kwon’s reassuring words about a recovery remedy.

“Getting close… remain strong, lunatics,” Terra’s creator posted on Twitter as an update to a post assuring users that the network was close to revealing a recovery plan for its stable currency.

Terra uses its resources to absorb the stablecoin supply that is about to run out.

Do Kwon has emerged in a post uploaded minutes ago, offering an explanation and a recommended cure after becoming MIA.

“The price stability mechanism is absorbing UST supply (over 10% of total supply), however the expense of absorbing so many stablecoins at once has stretched out the on-chain swap spread to 40%, and Luna price has dropped considerably as a result of the arbs being absorbed.”

Kwon acknowledged that the only way out of this mess is for the remaining stablecoin supply to be quickly absorbed. To that goal, Terra’s creator detailed a series of steps to restore market stability.

“First, we endorse the community proposal 1164 to Increase basepool from 50M to 100M SDR *) Decrease PoolRecoveryBlock from 36 to 18 This will increase minting capacity from $293M to ~$1200M, “ he wrote. “Naturally, this is at a high cost to UST and LUNA holders, but we will continue to explore various options to bring in more exogenous capital to the ecosystem & reduce supply overhang on UST.”

Do Kwon ended the post by urging the Terra community to respond positively.

Visit our Terra guide to learn more about these tokens.